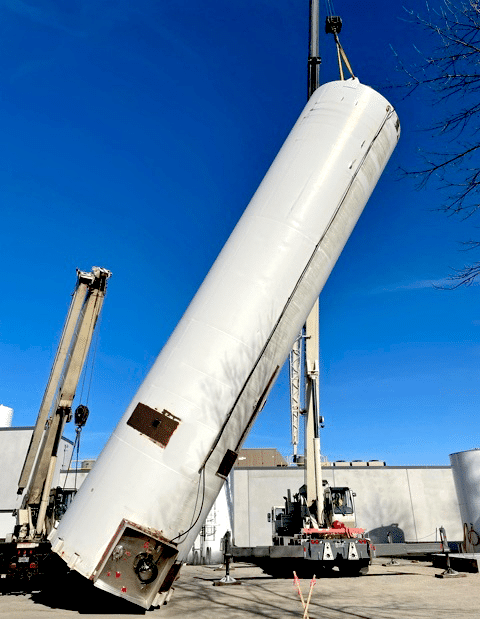 For several years, this cheesemaker had been dealing with leaks in one of their two equalization silos. Multiple patches had been made, but the leaking continued. The company made a decision to replace the existing 15,000-gallon silo with a much larger, 48,000 gallon silo to allow for future production expansion, and went ahead and made the purchase. However, at this point they weren’t sure what to do next.

The WDS Construction Special Services Division was brought in to make the project a reality. Disruption of production was a key concern expressed by the client. Additionally, as the silo had already been purchased, WDS was challenged to remove an existing silo that was partially embedded in the wastewater treatment building, and replace it with a new 56′ tall silo requiring a much larger footprint.

Pre-planning was essential, and WDS brought in two different engineering teams for ideation and proof of concept prior to any construction commencing. The existing silo foundation had neither the necessary footprint nor depth of concrete, so WDS Construction created a template based upon the silo anchor bolt pattern, and laid out the pattern onsite. Ultimately, the foundation was lengthened by five feet, with two feet of additional thickness added to the slab to accommodate the much larger silo. Additionally, a decision was made to fully separate the silo from the adjacent building, necessitating construction of a small alcove, matching the façade materials in-kind.

To eliminate the need for any costly production downtime, plans were made to remove and replace the silo within a 72-hour period. The client worked to generate enough excess capacity to allow the plant to remain operational throughout the construction process. Although the project was planned for 72-hours, the client was able to generate enough excess capacity for up to five days of production.

When the limited construction window arrived, WDS was able to remove the existing silo and send it off for recycling; however, there were concerns about incoming weather that had the potential to disrupt the project. Delaying the process was not an option. WDS poured the new pad, then erected a temporary shelter to allow the concrete to cure despite torrential downpours that followed. Because of this, WDS was able to meet the schedule, constructing the alcove, installing the silo, and seamlessly connecting it with the adjacent wastewater treatment building.

What facilities challenges are you facing right now? Do you have a problem in need of a solution? This is where the WDS Construction Special Services Division lives and thrives. Reach out, and let’s talk – the solution may very well be within your reach!

Contact me at sharmsen@wdsconstruction.net. I look forward to hearing from you!